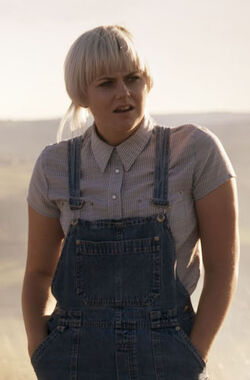 Trev, is a fictional character in the television series This Is England, and she is portrayed by Danielle Watson.

Trev is a quiet, shy member of the group who is best friends with Kelly. She wears iconic Fred Perry Harrington jackets and polos, brogues and Levi's Jeans.

"I'm up for anything basically. Let's bring the fuckers down." — Trev

She was part of the skinhead gang, and good friends with Lol, Kelly, Pob, Smell and the others. Her father was a plumber who fitted Carrotbum's jacuzzi.

In 1983, Trev was a blondie skingirl that hung around with Kelly, Lol, Smell and the rest of the gang. When Shaun was initiated into the group, she helped to shave his head. After Combo returned from prison and the group split apart, she didn't see much of Shaun and Gadget and the others that joined the nationalist group. She, Pob and Kelly were not present when Combo made his speech, Milky was attacked and Combo left the town.

In 1986, when the England vs Poland world cup game was on, Trev stopped by Lol and Kelly's parents' house to head down to the pub with Kelly to watch it. However Kelly had already left, but her father Mick invited Trev in, telling her Kelly was on her way. She awkwardly watched the football match with Mick for a while before he grabbed her and violently raped her. He then told her to get out of the room.

Trev then slept rough, and the next morning Trev waited outside Lol's flat, traumatized by what had happened. She waited for Woody and Milky to leave before going into the flat to see Lol. After much hesitation, Trev told Lol that she was raped by Mick. She showed her the bruising and marks from the night before. Lol told her go to sleep, while she went to Mick's house, armed with a hammer to confront him.

Later, Mick was killed, allegedly by Combo, and Trev listened to the England vs Argentina game with Lol, Woody, Milky, and Kelly.

In 1988 Trev was still hanging around with Kelly and the others. She paid Lol a visit at her flat and the two had some beer and cigarettes, and watched the TV. Trev was present when Woody confronted and attacked Milky. She went home with Kelly and insisted on seeing Lisa, Lol's child, but as they went upstairs they found Lol had taken an overdose in a suicide attempt.

They rang the ambulance and Trev went round to Woody's house to tell him. Trev and Woody went to the hospital and when they got there Trev realised that Lol had survived, and Woody went downstairs to see her. Trev started to cry but Kelly comforted her. Milky, Kelly, Chrissy and Trev then started eating and talking in the empty hospital ward to celebrate christmas.