As Christmas Eve turns to Christmas Day, Shaun is devastated after Smell caught him cheating at the after-show party. Mum Cynthia and Mr. Sandhu (now a surrogate father to Shaun) comfort Shaun and promise him that Smell will eventually forgive him.

Meanwhile, most of the gang is out getting merry until they bump into Woody and Jennifer. It is revealed that Woody didn't find out about Lol and Milky's affair until the birth of a mixed-race daughter, Lisa. A distraught Woody, revealing he'd earlier attempted suicide, cannot control his rage and attacks Milky, who refuses to fight back or walk away. The others break up the fight and lead Milky away, with Woody repeatedly screaming how he loved Milky like a brother. Woody calls Milky a "snake in the grass," repeating what Combo had accused Woody of being in 1983. Woody eventually realises he can never love Jennifer as much as he loved Lol, and they agree to end their relationship and remain friends. 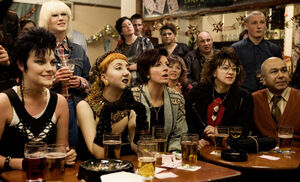 Lol seeks solace in a midnight mass service, but it does not ease her pain, and she has visions of Mick again. Feeling unable to cope any longer, and consumed with guilt over Combo's prison sentence, Lol takes an overdose of Paracetamol. Trev and Kelly find her and rush her to the hospital where her stomach is pumped. Trev, after being unable to contact Woody by telephone, goes to his parents' house, where they are all opening Christmas presents. On hearing of Lol's suicide attempt, Woody rushes to the hospital, where he finds Lol's bed empty. He immediately thinks she has died, but Lol's mother and friends (including Milky) inform him that she is alive, doing well and is nearby having a smoke. Woody and Milky finally make up, and Woody goes to talk alone with Lol. She tells him about her emotional problems, and the truth about her father's murder. Visibly shaken, but touched by Combo's sacrifice, Woody tells Lol he still loves her and can't be with anyone else.

The episode ends with Woody and Lol in each other's arms, and then cuts to various members of the gang – including Combo in his prison cell, eating his Christmas meal with a plastic fork. Shaun is shown having Christmas dinner with his mother and Mr. Sandhu, but still miserable over losing Smell.