This Is England Wiki
Register
Don't have an account?
Sign In
Advertisement
in: Main Characters, English Nationalist Group, The Gang, Children 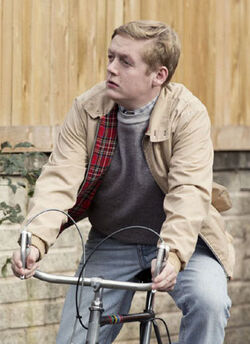 Shaun Fields, is a fictional character in the television series This Is England, and the protagonist in This Is England. He is portrayed by Thomas Turgoose.

Shaun was born in 1969 in Scotland, as revealed in 1990. During 1983, he was a 12/13-year-old schoolboy who joined a skinhead gang, lead by Woody, and then Combo. Having lost his father in the Falklands War, he has had a hard time fitting in at his school.

12-year-old Shaun meets Woody after being bullied at school, who introduces them to his gang and he gains new friends. However, 32-year-old Combo, an old friend of Woody's, returns from prison and divides the gang by introducing racist views to them. Shaun, wanting to make his father proud, sides with Combo and attends National Front meetings. However, his friendship with Combo ends when he violently attacks Shaun's black friend Milky. Shaun is seen crying, having distanced himself from all of his friends, ashamed of his actions and what has happened.

15-year old Shaun finishes his exams and rejoins the group. He is bullied by Flip. He helps Combo gain his footing after stumbling into Shaun's house and losing his mother. Shaun begins working for Mr Sandhu in his video shop, yet discovers his mother is sleeping with his boss. Shaun runs away from home.

17-year old Shaun carried on his relationship with Smell until Christmas of 1988, when he was cast in a school play and cheated on her with his co-star Fay. Ashamed at himself, he spent Christmas alone with his family.

Shaun, now 19, is now a member of the young gang, attending raves and the Madchester town hall night. He is struggling to stay happy without Smell. After gaining a place on a photography course and Cynthia buying him the latest camera, at the local college he meets Juliette whom he forms a relationship with. At Woody and Lol's wedding, he is seen fighting off an estranged Smell.