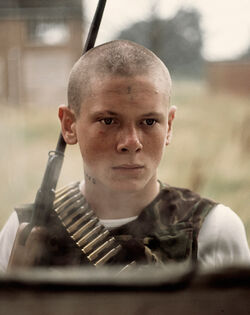 Pukey Nicholls, is a fictional character in the television series This Is England, and he is portrayed by Jack O'Connell.

Pukey is first seen in the underpass with the others and he is introduced to Shaun by Woody, and he says he's a bit of a nutter, and is best to keep on the good side of him. Pukey can be violent and aggressive, and can often take things too far.

Pukey joins the English Nationalist gang, and goes with Combo's group to a National Front meeting. After Pukey expresses doubt over the group's racist and nationalistic politics, Combo threatens and abandons him. He goes back to the others who didnt agree with Combo's beliefs, who take him back with open arms.

Channel 4's terms for This Is England '86 series was that the original gang had to be slimmed down. This resulted in the removal of a few characters that were in the feature film: Kes, and Pob, were cut, while Pukey, had to be cut as the actor had other commitments. Pukey's dialogue and story was given to the returning character Harvey, who had a bit-part in the film as a bully.

He is present in the third episode of This Is England '88 through stock footage during Lol's flashbacks during her suicide attempt.