This Is England Wiki
Register
Don't have an account?
Sign In
Advertisement
in: Deceased Characters, Characters, Parents,
and 2 more 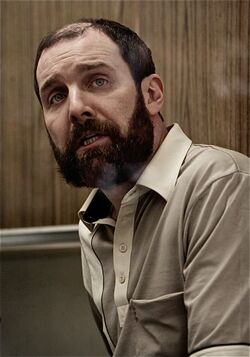 Michael "Mick" Jenkins is the estranged father of Lol and Kelly and the main antagonist of This Is England '86. He is portrayed by Johnny Harris.

In the series, Mick represents the classic and most infamous dilemma faced by the law concerning emotional and psychological abusers, who are generally seen by the public as the biggest lawbreakers around but who avoid punishment due to the lack of physical evidence of their crimes. Although Mick's abuse is mostly in such a sense, he also delves into sexual assault, though still without leaving evidence.

From the start of the series, it is obvious that Chrissy is the only one who wants Mick around, though this is only because she has been emotionally beaten so badly that she genuinely believes that he is a good person despite his evil nature, while Kelly is visibly uncomfortable around him, but Mick "wins" her over with his acting skills combined with reverse psychology, "promising" her that if she does not want him around, he will leave (which he obviously will not). Lol is the only one who knows him for the evil man he is, but because of his manipulations, nobody comes to her defense, and Chrissy outright tells her to "fuck off out of my house" in Mick's favour, and at one point Mick even threatens Lol with violence if she continues to damage his image in front of Kelly. Though this essentially constitutes emotional violence, Mick cannot be prosecuted by the law because he has cleverly resorted only to words instead of action, and people like Mick in real life are often seen as the victims due to their superb acting skills which make the victims themselves look like slanderers and liars.

Furthermore, Mick represents another dilemma when he is killed. Though Lol murders Mick in self-defense (and to avenge her friend Trev, who Mick had raped and then frightened into keeping it from the law), Mick leaves no physical evidence that he was trying to rape Lol, while Lol literally smashes Mick's head in with a hammer, which makes it look like first-degree murder, even though it was not. Combo apparently seems well aware of this, and alters the crime scene to make it look as if he himself murdered Mick to defend Lol, but even after this is proven in court, Combo is still sentenced to prison time for manslaughter, even though he may very well have saved Lol's life in the process. Even after his death, Mick has left a notably legacy that ultimately leads to Woody and Lol separating, Woody and Milky falling out, Lol almost committing suicide out of guilt for murdering her father and letting someone else take the inevitable fall, and Kelly running away from home when she refuses to believe Lol and Woody's confession about the truth regarding Mick. In these cases, the law only steps in when physical damage has been dealt, mostly by when it is too late: if the victim has been murdered, the law cannot rectify it, no matter what punishment is dealt to the abuser; if the abuser has been murdered but leaves no physical evidence of their crimes, the victim will be punished in their stead, despite acting in self-defense, due to the lack of proof. Shane Meadows goes to great lengths to emphasise the importance of this struggle against emotional abusers, and leaves an emergency hotline at the end of the penultimate episode of This is England '86 for rape victims.

Through dialogue, it is implied that Mick was a self-centred, violent and sexually abusive man, frequently abusing his wife Chrissy and molesting his eldest daughter, Lol. At one point, Lol's friend Combo found out about Mick molesting Lol and tried to beat Mick up, but since Combo was only 17 years old, Mick easily beat Combo severely and left him in the street to die, though Lol found Combo and got him to the hospital. For unknown reasons, Mick eventually left the household, abandoning his family.

Mick returned in 1986, claiming that he was a changed man. Chrissy, despite how badly he had treated her, welcomed him back with open arms, deliberately missing Lol's wedding in order to spend time with him and even giving Lol's old bedroom to him. He is first seen giving Shaun a lift to the hospital with Chrissy. Later, while Mick apparently seems to be mending old wounds with his family, Lol returns home after being disgusted with her new residence chosen by Woody. Unlike the others, however, Lol is disgusted by his return, and hints that he used to abuse her, worrying Kelly, but Chrissy comes to Mick's defence and orders Lol to "fuck off out of [my] house". Mick later goes to her and Woody's flat to speak with Lol, but Lol receives him coldly and accuses him of molesting her again. Mick's violent tendencies begin to resurface when he grabs Lol by the neck and severely orders her to stop warning Kelly about him.

However, Lol's worst fears are realised one night when Mick rapes her friend, Trev, while they are watching a football match together (Trev came looking for Kelly and Mick fooled her into thinking Kelly would return soon). From there on, Mick reverts to his old ways and becomes more dismissive toward his wife than ever before, even when she shows him utmost respect.

Mick eventually decides to abandon his family again, but as he is in the process of leaving, Lol confronts him, Trev having told her about the rape. In the ensuing argument, Mick admits that he hated Lol from the day she was born, since he saw her as more of a burden than a daughter, especially when she came to resist him instead of submitting to his abuse like Chrissy did. When Mick threatens to kill Lol, she presents a hammer as a warning. Mick loses his temper and forcibly tries to rape Lol, but Lol fights back by striking him in the head with the hammer numerous times, stunning him. Lol then swings one final blow to Mick's head, killing him instantly. Combo, remembering his previous fight with Mick and unwilling to let Lol go to prison for self-defence, takes the blame for Mick's murder, altering the scene to make it look as though he fought and killed Mick in Lol's defence. Combo is subsequently sent to prison for manslaughter but with a clear conscience.

Though dead, Mick continues to haunt Lol due to the guilt she feels for murdering her own father. He frequently appears in Lol's visions, following her around and claiming that he will never stop tormenting her. This drives Lol to attempt suicide by overdosing on pills, but she is rushed to hospital and her stomach is pumped. In the process, she sees flashbacks of her encounters with Mick. Following this, Lol confesses her guilt to Woody and appears to recover.

Lol continues to have nightmares about Mick. With Combo's coming release, Lol and Woody decide to allow him to stay with them as gratitude for taking the fall for Lol, which prompts Lol to reveal the truth surrounding Mick's death to Kelly, Milky and Shaun. Kelly refuses to believe her father was an evil person, and asks Chrissy why she took Mick's side against Lol if the story is true. Chrissy breaks down in tears and admits that she was both in love with him and frightened of him. Kelly is still shaken from the news and runs away from home. The revelation also puts a strain on Woody and Lol's friendship with Milky, who refuses to forgive Combo for almost beating him to death seven years ago.