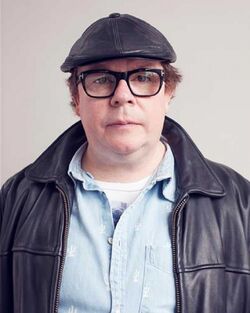 Ronald Megford referred to as Meggy, is a fictional character in the television series This Is England, and he is portrayed by Perry Benson.

Meggy is a character who hangs out with the gang and his presence really gives an already unique gang a further sense of individualism. Like Banjo and Combo, he probably hasn't had it easy in life which is why he has fallen into reactionary ways. A bookie by trade from East London, little is known as to why he began to hang around the group, despite the age gap. He is first seen at a party with the gang talking to another woman.

"He is an adult that hangs around kids and talks absolute crap, the type of sad human being that does so because probably no other adults would take him seriously. He's a bit of a nonce case really." — Perry Benson on playing Meggy

Benson described his role as "The character I play is called Megg, he is an adult that hangs around kids and talks absolute crap, the type of sad human being that does so because probably no other adults would take him seriously. He's a bit of a nonce case really, and although he is there when violent things happen I wouldn't really describe him as violent. Not likeable though."

It is presumed he was friends with Combo before he went to prison, as he is present when Banjo and Combo gatecrash. Combo is happy to see Meggy, leaving the audience to assume they have known each other a long time beforehand. He is first seen at the party chatting up a female, Meggy joined Combo's English nationalist group after his speech and attended the National Front meeting. He tries to evacuate his bowels in Mr Sanhdu's shop. Later, he witnessed Combo flip out and attack Milky, it appears he is jeering Combo on, but then mentions that he 'thought you was winding us up' which one can assume he didn't know what was happening. Combo smashed a bottle over Banjo and the blood going in Meggy's face. Combo then beat up Banjo and strangled Meggy but they both escaped with haste and left Combo in the flat with the unconscious Milky.

Meggy is still a member of the gang in 1986 and has paired up with Banjo who both act as the comedy relief duo. After making food for Woody and Lol's wedding, he has a heart attack in the toilets at the wedding reception but Harvey fortunately, saves him and takes him to the hospital. He then recovers and manages to get out of hospital quickly with the gang. It is later hinted that he has a son with Trudy, as the boy has very similar characteristics to Meggy. The two get on well, yet Winston has no idea, under the impression his father is in London.

Despite not appearing in This is England '88, and producer Mark Herbert tweeting that this was because the character apparently 'died taking a dump' off-screen in 1987, Meggy appears alive and well at Woody and Lol's wedding talking to Higgy and Woody's dad.

Retrieved from "https://thisisenglandpedia.fandom.com/wiki/Meggy?oldid=6421"
Community content is available under CC-BY-SA unless otherwise noted.