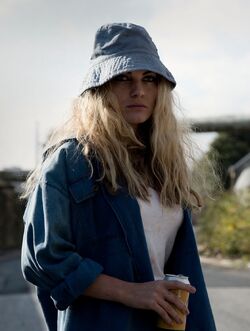 Kelly is a young woman growing up near Nottingham in the 1980's. She is the sister of Lol, but was mainly shielded from the things that her father did during her childhood before he left.

"At the end of the day, if they smack you, smack them twice as hard." — This Is England promo cast clips

Kelly and Lol became part of the skinhead gang along with Trev, Pob, Smell, and the other boys.

When Shaun Fields joined the gang in 1983, she helped shave his head, and was present at the party when Combo returned. She wore Harrington Jackets and typical Skingirl clothes, and also had the shaved hairstyle. Lol often protected her from incidents, like when Banjo threatened the gang, and Lol specifically told her not to come to Combo's flat, where he made the speech, because she wanted to protect her.

She stayed friends with the gang for the next few years, attending the wedding of Lol to Woody. Around that time her father moved back in with her mother, and Kelly was delighted despite Lol's reservations. When Lol hinted that their father used to "go into little girl's rooms" Kelly became suspicious, and Mick tried to ease her mind by saying Lol was a liar. Later Kelly went to the pub to watch the world cup game, oblivious to the fact her father was raping her friend Trev at the time.

A little while later her father was killed, and Combo was sent to prison for the crime. Kelly was distraught, and watched as her sister had a daughter but became more and more depressed. On Christmas Eve 1988, Kelly offered to spend the night with Lol, but her sister went home alone. The rest of the gang then ran into Woody, who attacked Milky in front of them. Kelly went back with Trev, but found that her sister had overdosed on paracetamol. She called an ambulance and the doctors were able to save Lol's life.

Kelly is now a lunch lady at the local school alongside her sister Lol and mother. In the episode 'Spring', her friend's car breaks down in the middle of nowhere and she joins in on the rave that leads her to taking heroin and getting gang raped. In the episode 'Autumn', Combo is returning from Prison and so Lol is forced to tell the whole group (including Kelly) about the secrets of her father. It is here that Kelly learns the reality of who her father is, but she does not take the news well; reacting in utter fury as she smashes glasses and hysterically screams “You two were the special ones, weren’t you?” after hearing that both Lol and Trev were raped by her father. Kelly is addicted to heroin, and is pursued by a love interest from Gadget.

Community content is available under CC-BY-SA unless otherwise noted.