This Is England Wiki
Register
Don't have an account?
Sign In
Advertisement
in: Main Characters, The Boys, The Gang 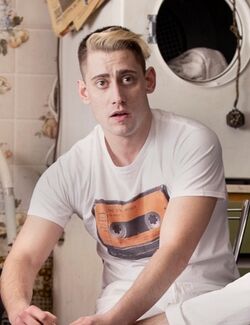 Harvey is a fictional character in the television series This Is England, and he is portrayed by Michael Socha. A young man growing up near Nottingham in the 1980's, Harvey is a charismatic and funny member of the gang. He is often seen with Gadget and the two act as a comic relief duo in the show.

In 1983, Harvey was part of a mod/rudeboy group, who bullied Shaun because of his trousers. Harvey is first seen at the local school, sitting with his friends by the fountain. He insults Shaun, the protagonist of the film, about his dead father and then gets into a fight with him. It is possible that Harvey bullied Shaun for a long time before the film. The two are sent to the Headmaster's office where Harvey is punished with a cane. Upset by the insults from Harvey, Shaun wanders the town and comes across the gang in the underpass where he encounters Woody who impersonates Harvey and comments on how effeminate his name is in order to cheer Shaun up.

Taking the place of Pukey, Harvey plays a minor role in the spin off television series, This Is England '86. By 1986, Harvey had become part of the skinhead group. He becomes good friends with Gadget, the pair steal some flowers from a graveyard for Lol and Woody's wedding. It is revealed that he is physically abused by his father, who is seen punching him and calling him 'divvy boy'. This may be why Harvey bullied Shaun while he was at school, but Shaun and Harvey seem to get along well, both referring each other as 'mate' on several occasions during conversations, so the two presumably made amends when Harvey joined the gang.

Harvey looses a tooth during the fight on the green, where Flip headbutts him in the face, ironically he is the first person to hit Flip after he insults Shaun. He then carries on and helps the gang win the fight. After staying at Trudy's with the gang, after the fight, he sits in the garden with Gadget. After this is then only briefly seen in the other episodes sitting in the pub watching the football.

By 1988 Harvey was going out with a girl called Titch. He was with her when Milky returned after a long absense, and jokingly told him not to go near Titch for fear of another black baby being conceived (in reference to Milky's daughter Lisa). He takes drugs to Shaun's play and shares them with the rest of the gang. This causes them to laugh throughout the show which annoys the rest of the audience. Harvey was later present when Woody and Milky had a fight, pulling Woody away from the confrontation. He is then finally seen having christmas dinner with Gadget and his mother, and Banjo.

Harvey is now a much more central role in the series. He is seen as the leader of the younger group, which included Kelly, Gadget, Shaun and Trev. Harvey and Gadget appear to be living with each other, and enjoy attending the all night raves and Madchester nights at the community centre. He is also a small time drug dealer, often being pestered by the grovelling Flip and Higgy. He is seen wearing Stone Roses t-shirts, along with a blonde quiff for hair.

Channel 4's terms for This Is England '86 series was that the original gang had to be slimmed down. This resulted in the removal of a few characters that were in the feature film: Kes and Pob were cut, while Pukey had to be cut as the actor had other commitments. Pukey's dialogue and story were given to the returning character Harvey, who had a bit-part in the film as a bully; the series does not explain how he joined the gang or got on friendly terms with Shaun. A new bully, Flip, takes Harvey's place as Shaun's tormentor and leads a scooterboy gang (Harvey is ironically the first person to hit him for threatening Shaun in episode 3). 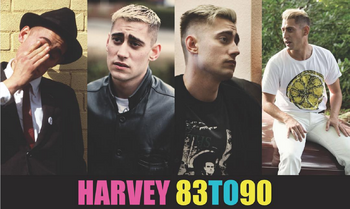