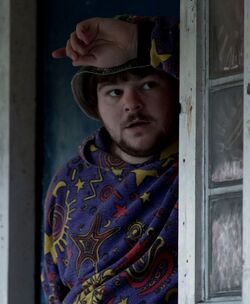 Gary Flowers, more commonly known as Gadget, is a fictional character in the television series This Is England, and he is portrayed by Andrew Ellis.

Born in 1969, a 14 year old Gadget was first introduced in the tunnel when Shaun met the gang. He was initally hostile towards Shaun but eventually they became friends. Gadget felt victimized by the gang, in particular Woody, which causes him to side with Combo when he splits up the gang. He joined the National Front with Combo and the others, often seeming confused about the real political side of the meeting, only following the crowd in an attempt to rebel against the mockery that the group before used to subject him to. Pukey is kicked out of the car and he looks at Gadget for help, only to leave him there. He also helps steal stock from Sandhu's newsagents, taking as many sweets as he can possibly carry. He is at Combos flat the day he beats up Milky, however he is taken home by Smell before the attack due to smoking too much marijuana. After the attack it is assumed he went back to Woody and was welcomed back into the group.

In 1986 Gadget is back with the gang, paired with Harvey (originally intended to be paired with Pukey) and act as the supplementary the comic relief duo. He wears a headband and shows hip-hop influences in his clothing. He claims that he and Kelly were meant to be together whilst at the party at Carrotbum's house. When he finds her with someone else, he storms out of the house and begins crying in the garden.

This then subsequently leads to a relationship with Trudy which lasted 8 days, during which time he grows a moustache and discovers that she has a son with Meggy, although Meggy does not know. He is eventually brought to his senses by Harvey who explains that Trudy is just using him and that she has been with most of the other male members of the gang and had been making him dress as Clark Gable. He is present at the fight at the park where he is hit by Flip. He is also seen at the pub watching to football matches whilst the events with Trev, Mick and Lol take place.

In 1988 Gadget first appears at the pub when Milky arrives with some of the gang claiming to be suffering from achy balls. He has a perm and wears a leather jacket. He was present at Shaun's play and subsequently later when Milky and Woody had their fight and attempts to calm them both down. He is last seen eating christmas dinner with his grandmother, sitting at the table with Harvey and Banjo.

Gadget is 20 and is now heavily influenced by Madchester and The Stone Roses. He goes to the illegal all night raves with Harvey, Trev, Kelly and Shaun, and comforts Kelly when she becomes homeless. Whilst not watching the wrestling and smoking cannabis from a bong, he is attempting to get school dinners from Lol, whist being tricked by Woody and Milky in receiving the cheap food. He is finally seen at the wedding dancing with Harvey and Kelly.

Retrieved from "https://thisisenglandpedia.fandom.com/wiki/Gadget?oldid=6253"
Community content is available under CC-BY-SA unless otherwise noted.