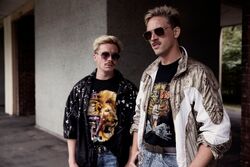 Flip, is a fictional character in the television series This Is England, and he is portrayed by Perry Fitzpatrick .

Flip is the brutish leader of the local moped gang in This is England '86. He is the main antagonist to Shaun, seen using him to seduce Jemma, after his plan is foiled, Flip and his gang start a fight with the main gang, resulting in various arrests.

Flip is seen with his gang, and sidekick Higgy. They ride mopeds and wear football casual clothing such as Sergio Tacchini, Ellesse and Fila tracksuits. They approach Shaun eating his chips at the bus stop and threaten him. After his plan to seduce Jemma is foiled, he is infuriated and searches for 'Ginge' (Shaun). Him and his gang approach the group during a game of football. After headbutting Harvey and losing the fight with the gang, he is not seen again until 1990.

Flip and Higgy are now seen wearing sunglasses, velvet waistcoats and have grown moustaches. They appear to be styling themselves on Duran Duran and Bros. They now act as the comic relief duo for the series, even buying a £1's worth of cannabis, in order to allow a woman to smell it to become intoxicated. They are clueless and feeble, sucking up to Harvey and the gang. Flip still appears to have a hatred towards Shaun. But later its known they make amends at a hippie Rave, as they are seen jumping and hugging each other while on Ecstasy.

Flip and Higgy are then seen at Woody and Lol's wedding.