Andrew "Combo" Gascoigne is the main antagonist of This Is England and a supporting character in ´86, ´88, and ´90.

Born in 1951, little is known about Combo's life before the events of the original film. According to dialogue throughout the saga and behind the scenes, it is suggested that Ruby Porter, (AKA, '23-6C0' upon members of the early National Front gang in Combo's area of youth) was a heavy influence throughout Combo's early life, she is suggested to have influenced his childhood beliefs and ideologies, and even tattooing the name 'B9-124' onto Combo's inner thigh as an initiation to her personal gang of 9 skinheads, at the age of 8. He states in This Is England that he was part of the original skinhead subculture in 1969. Combo is quoted in the film (set in 1983) "twenty years ago when I was twelve". He loved ska music.

Combo takes his group to a National Front meeting where they become members of the political party. On the way back, Pukey expresses doubts over the group's racist views, prompting Combo to threaten him violently and tell him to 'piss off back to Woody's'. Combo and the others then engage in racially antagonistic acts, such as spraying racist remarks on walls and threatening Asian boys playing football. When Combo threatens he ever sees them on the streets again, he tells them to go home where their mum's cooking curry. When Shaun enters the Newspaper shop of Sandhu (Kriss Dosanjh), a Pakistani shopkeeper, he tells him to give him 100 fags, two bottles of wine, a bottle of whiskey, and 10 cans of lager, calling Sandhu a 'Paki bastard.' Combo and the rest of the gang start robbing Sandhu who had previously banned Shaun from his shop. The trouble is Combo threatens to slay Sandhu with the sword. Shaun bonds with Combo, seeing him as a surrogate father figure. Things take a turn for the worse when Combo approaches Lol (Vicky McClure) and admits that he has feelings for her too. Lol, who is angry with Combo for hurting Woody's feelings, rejects him and tells him that their one-night stand was the worst night of her life, even when Combo says it was the best night of his. Devastated, Combo approaches Milky, buys cannabis from him, and invites him back to his flat in an attempt to forsake his racist views. Whilst intoxicated, Combo and Milky bond but Combo grows jealous of Milky's happy family life and attempts to provoke him into fighting. Milky merely smiles cheekily at Combo, Shaun tells Milky to stop smiling at him and Combo loses his temper. Enraged, he beats Milky unconscious, Banjo holds down Shaun, who is protesting all the while, and Meggy watches them in horror. Combo angrily throws Shaun out of his flat for defending Milky then tells Meggy that he was winding him up. Combo turns his rage on Banjo, throwing a bottle at him and Meggy. When Combo violently beats Banjo, Meggy calls him 'mad as a March hare.' Combo furiously orders both Banjo and Meggy out of his flat and turns to Milky who is seemingly dead. When Shaun is shown crying, he comes back into the room, but a remorseful Combo is weeping in shame. He manages to convince him to stop crying and help get Milky to the hospital. 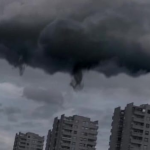