This Is England Wiki
Register
Don't have an account?
Sign In
Advertisement
in: Main Characters, English Nationalist Group, Deceased Characters 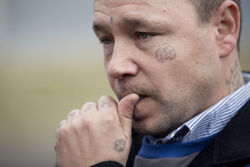 Andrew "Combo" Gascoigne is the main antagonist of This Is England and a supporting character in ´86, ´88, and ´90. He is portrayed by Stephen Graham.

Born in 1951, little is known about Combo's life before the events of the original film. He states in This Is England that he was part of the original skinhead subculture in 1969.

32-year-old Combo takes his group to a National Front meeting where they become members of the political party. On the way back, Pukey expresses doubts over the group's racist views, prompting Combo to threaten him violently and tell him to 'piss off back to Woody's'. Combo and the others then engage in racially antagonistic acts, such as spraying racist remarks on walls and threatening Asian boys playing football. When Combo threatens he ever sees them on the streets again, he tells them to go home where their mum's cooking curry. When 12-year-old Shaun enters the Newspaper shop of Sandhu (Kriss Dosanjh), a Pakistani shopkeeper, he tells him to give him 100 fags, two bottles of wine, a bottle of whiskey, and 10 cans of lager, calling Sandhu a 'Paki bastard.' Combo and the rest of the gang start robbing Sandhu who had previously banned Shaun from his shop. This makes Combo threaten to slay Sandhu with the sword. Shaun bonds with Combo, seeing him as a surrogate father figure.

Things take a turn for the worse when Combo approaches Lol (Vicky McClure) and admits that he has feelings for her too. Lol, who is angry with Combo for hurting Woody's feelings, rejects him and tells him that their one-night stand was the worst night of her life, even when Combo says it was the best night of his. Devastated, Combo approaches Milky, and attempts to buy cannabis from him, and invites him back to his flat in an attempt to stop Milky from dating a white girl which can be seen to visibly anger Combo . Whilst intoxicated, Combo and Milky bond and Combo tells Milky of three uncles and two aunts. Combo grows jealous of Milky's happy family life, who attempts to provoke him into fighting. Milky merely smiles cheekily at Combo, Shaun tells Milky to stop smiling at him and Combo loses his temper. Enraged, he beats Milky unconscious, Banjo holds down Shaun, who is protesting all the while, and Meggy watches them in horror. Combo angrily throws Shaun out of his flat for defending Milky then tells Meggy that he was winding him up. Combo turns his rage on Banjo, throwing a bottle at him and Meggy. When Combo violently beats Banjo, Meggy calls him 'mad as a March hare.' Combo furiously orders both Banjo and Meggy out of his flat. Horrified at what he has done, Combo turns to Milky, who is seemingly dead. When Shaun is shown crying, he comes back into the room, but a remorseful Combo is weeping in shame. He manages to convince him to stop crying and help get Milky to the hospital.

Two years later, Lol visits Combo in prison. Looking back on her life over the past few years, Lol has come to realise that Combo was the only one who was ever truly there for her. She visits him to thank him and apologise for what she told him in 1983 and admits that she does love him (the exact nature of this love is not revealed). During the visit, Combo asks about Woody and Milky and is shown a photograph of Lol's baby daughter Lisa, who was the result of a fling with Milky. Combo appears to be genuinely happy for Lol and does not make any racist remarks, hinting that he has abandoned his racist ways. Combo also tells Lol that he is changing his life for the better and continuing with his education by taking his GCSEs in English, Maths, and Sociology. He is last seen in the final scenes spending Christmas alone in his cell, eating Christmas dinner whilst reading.

Combo moves in with Woody and Lol, sharing a tearful embrace with Woody and showing his guilt for what he has done to Milky (as this is the first time Combo and Woody have seen each other after the former beat Milky) and symbolising Woody's forgiveness. He smokes and drinks with them, and openly inquires about Lisa, whom they say is spending time with Milky, though Combo still appears to believe that Milky does not want Lisa near him.

Combo eventually moves out of Woody and Lol's place and manages to get a job with Helen (Lol's nurse), as a sports coach for disabled teenagers, changing his life for the better. On his first day, however, during his lunch break, he runs into Milky who confronts him about the past. Milky asks to discuss matters with Combo over a "brew", to which Combo agrees, although Combo senses something is wrong when Milky drives him to a cafe far away from where they set off. Combo is deeply apologetic for his previous behavior and wishes to earn Milky's forgiveness. Their conversation is cut short when some of Milky's relatives menacingly enter the cafe. He explains that whilst he was in the hospital, his family swore to avenge the beating he had received from Combo. Accepting his fate, Combo states that he forgives Milky, and hopes one day Milky can forgive him. He then accompanies the men into their van and they drive him to an abandoned warehouse where they park and turn up the radio. However, instead of beating him up as he expected, the men hand Combo over to two white hitmen whom Combo appears to recognise. He struggles and begs them to spare his life. The two men carry Combo, struggling and screaming for help, up the stairs into a room and the door is closed. He is not seen again.

Early on in the film and series even though he would stand up for his friends if the situation arose, Combo is shown as a psychopathic racist, holding staunch opinions regarding immigration and being prone to violent outbursts of anger. Following his racist behaviour and near murder of Milky, Combo seems to be genuinely repentant of his actions and does his best to become a better man. We do not actually know if he died or not but is set up by Milky to be taken by some men who he appears to know. The last we see of him is him screaming that he does not want to die as he is carried through a door in a derelict building.