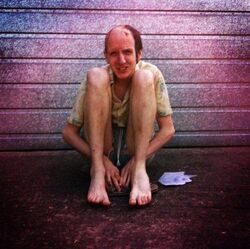 Jeremy, referred to as Carrotbum, is a fictional character in the television series This Is England. He was portrayed by Jack Thorne.

Carrotbum knew the gang prior to his appearance on the show. He is suspicious of all the members, but is more keen to spend time with the female members of the gang. Some time in his past, he had a carrot forcibly inserted up his bum, and it is implied that the guys of the group were the culprits.

In 1986, after Lol becomes displeased with her new living arrangements courtesy of Woody, she, Kelly, Trev, and Smell go to Carrotbum's house in the hopes of getting drunk and having a party. They are able to convince him to let them in by saying it is only the four girls and they are all wearing bikinis for his newly fitted jacuzzi. However, after letting them in, Woody and company arrive and the house eventually fills with people. The party goes on for much of the night and much damage is done to Carrotbum's house but he appears to enjoy himself despite being shaved.

Retrieved from "https://thisisenglandpedia.fandom.com/wiki/Carrotbum?oldid=5491"
Community content is available under CC-BY-SA unless otherwise noted.