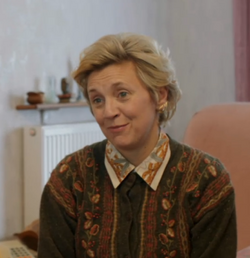 Barbara Woodford is a supporting character in the television series of This Is England. She is portrayed by Rebecca Manley.

A meek and motherly woman, she is caring for her son, but is incredibly embarrassing.

First seen in their house, she appears to be a loving wife and husband to her husband and son. She also attends the foiled wedding of Woody and Lol.

Babs takes a more frequent role in '88, as she and her husband are looking after their son, after the split from the group after Lol and Milky's child is born. She is seen usually in the house, wearing christmas cardigans and eating dinner at the table. Irritating and feeble, she appears to annoy Woody, but gets on extremely well with Jennifer, who seems to be a carbon copy of her in terms of dress sense and personality.

After downsizing to a new bungalow, Barbara surprise Woody with a visit from Mr Squires, before stating that they are not boring. She is seen later sitting next to Richard, who is apologising to Woody on the phone.